George Floyd & The Revolution That Must Come

After several memorial services, as a world chants his name, and bears witness to his image, George Floyd has been put into the ground. His innocence and good nature are irrelevant. It does not matter that he was a good son to his mother, father to his children, human being in his community. He is dead, another human life murdered by America.

His summary execution on a street in Minneapolis was part of a perfect confluence events to fan into full flame what has burned for 401 years. It had never been extinguished…merely burning perpetually in the underbrush. Peoples of a wayward nation perpetually striving for the power to live as human beings in a human society under a human government that must be forced to allow us do so.

The escalation of protest in the wake of George Floyd shed light on the year old atrocity law enforcement visited on Elijah McCain, the violin playing massage therapist executed via chokehold and forced injection for walking from a convenience store while Black. His mother described him as a “responsible and curious child” who could “inspire the darkest soul. Unfortunately his good nature failed to inspire the darkest soul of officers straining the life from his slight frame. Again, his innocence was irrelevant. “I was just going home. I don't have a gun. I don't do that stuff. I don't even kill flies. I don't even eat meat” was his irrelevant plea to his executioners. Not even his death was relevant to the police officers who subsequently celebrated their conquest by posing at the sight of his demise. Nor to the police department who cleared the officers of wrongdoing. Nor to the district attorney who declined to file charges. Nor to riot police teargassing violin playing lawful protesters against taxpayer sponsored murder.

For Black people, certainly by the time we are fortunate enough to reach middle age, this is nothing new. This is the subtext of every encounter with law enforcement in America. Whenever I see flashing lights in the rearview mirror the first question in mind: is this a peace officer or a slave patrol, followed by enacting the cop codes my father taught me and I teach my sons for surviving their presumption of criminality and existential threat. Fully aware of the conundrum of disproving perceived threat that is based solely on one’s existence.

This is where I am obliged to say the obvious: most cops are somewhere on the scale of descent human being. Some of my best friends…

I don’t understand the notion that law enforcement should be exempt from maintaining standards of law enforcement. When a great basketball player is on a bad team, how is he judged? Not able to make his teammates better. Puts up great numbers that fail to translate into wins. Ultimately, a loser. Yet were obliged to look at collective policing differently even though bad teamwork results in dead Black people.
It is irrelevant to the issue, and the reckoning, at hand how good, warm hearted, family loving, and gentle an innocent man or woman goes to their death from bad teamwork. Black assholes are no more deserving of street executions.

All men were created equal, endowed by their creator with inalienable rights to life, liberty and the pursuit of happiness. We should not misread the strategic rhetoric of the prophet Martin, President Obama et al to believe against the better sense of our experience the struggle was ever to make America live up to its ideals. Our country has never lived those ‘ideals’. American ideals do not align with American ideology, therefore are empirically irrelevant, unless we make them real.

The slaveholding “founding fathers” said exactly what they meant. It’s well past time we understood exactly what they said. “Men” was according to their definition of “man”. White. Male. Landowners. Wealthy. Black men and women consigned to chattel, white women banished to the margins, indigenous peoples targeted for extermination, were never intended to be included in the “all men”. Witness the enslaved humans laboring under the lash in the homes and plantations of the authors and signers of those august words.

The movement is not to persuade the nation to live up to those words. It never has and never will. The movement has always been to appropriate those words, give them hands and feet and teeth and voice and law, use them as raw materials to finish what the Civil War began: the reformation of a nation in conformity to the long arc of justice.

The story of America has always benefited those telling the story. That’s why the narrative is incoherent when confronted by the American reality lived by the majority of its citizens and disenfranchised populations. The mythic underpinning of “MAGA” does not comport with the reality of slavery, genocide, exploited labor, industrialist/ corporate avarice, environmental degradation, and anti-democracy politics.
The scandalous American shame is not simply that George Floyd, Breonna Taylor, Ahmaud Arbery, Sandra Bland, Tamir Rice, Trayvon Martin…Rayshard Brooks…Elijah McClain, etc. etc. etc. were murdered. It is that their murders were historically typical. I’m glad that the consciousness of so many good folks in America awakened upon video of Floyd’s police lynching. But 400 years of slumber regarding comprehensive racist violence, including Slave Patrol type law enforcement brutality, begs the question: What the fuck took y’all so long to wake up? Or like my dad would say back in the day when we tried to change channels on our one TV: Where you watching with your eyes closed? 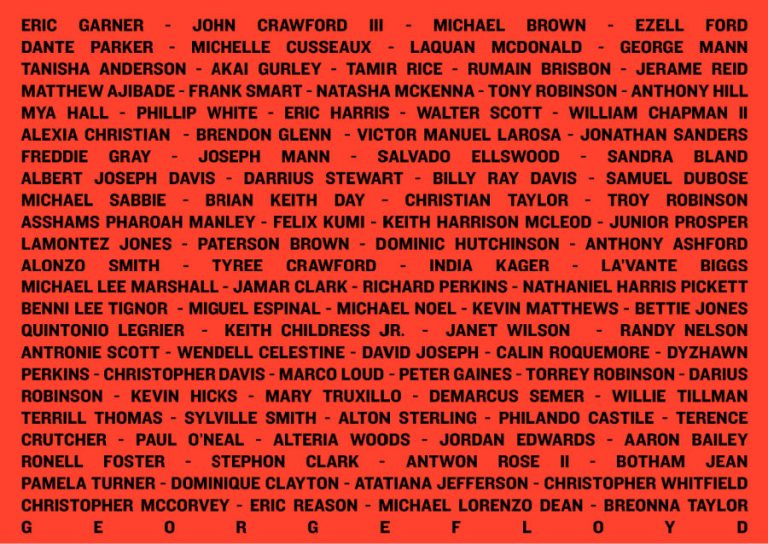 It also raises justified suspicion as to what this new “awakening” means. Clearly in the agenda of the powerful, it means frantically seeking magic pacifiers to placate freedom fighters at an acceptably low cost. Change images on pancake boxes! Reform syrup bottles! Embrace Juneteenth! Make it a national holiday!!! (Although seems to me, since the Emancipation Proclamation actually freed no one, due to the fact that it only applied to Confederate States at treasonous war against the Union, maybe the end of the Civil War might be a better National Holiday but I’m just saying.) Let’s do the platitudes dance! Tell us how, after seeing poor George Floyd, you now acknowledge our pain. Give us your thoughts and prayers! Change some names of university buildings that slaves built. Tear down statues of enslaving traitors! Do some lovely commercials! Issue corporate statements that admit our humanity. And above all, at long last, acknowledge that…drum roll…Black Lives….Matter.

Note to our white brother’s and sisters: fuck you if you think we don’t know we matter; if you think we need your affirmation that we matter. When young freedom fighters embraced and organized Black Lives Matter in the wake of the Trayvon Martin lynching, it was not a plea. It was an affirmation to ourselves, projected to the world. It was also a gauntlet thrown to a nation’s historically pervasive dehumanization, criminalization and demoralization war against Black self-determination.

Like the unfinished Civil War, this is bigger in scale than crimes against Black people. Deeply woven into the living fabric of our nation are crimes against humanity. A renovated pancake box is nothing. We must renovate the nation.

It begins where it has begun: in streets, votes, dollars, disruptions, creating, organizing, agitating, pressuring levers of power on all fronts to make this nation sustainable. Injustice inevitably collapses on itself.
We expose the past and promote peace and reconciliation with the teeth of fundamental political revolution and social reformation. We write the future of a just, diverse, compassionate, and economically humane nation.

We don’t dance. But someday we will.

Enjoy this? Now read 'Are You Ready to Rumble.'

The Irony of Gil Scott Heron

Nation Falls Under Own Weight