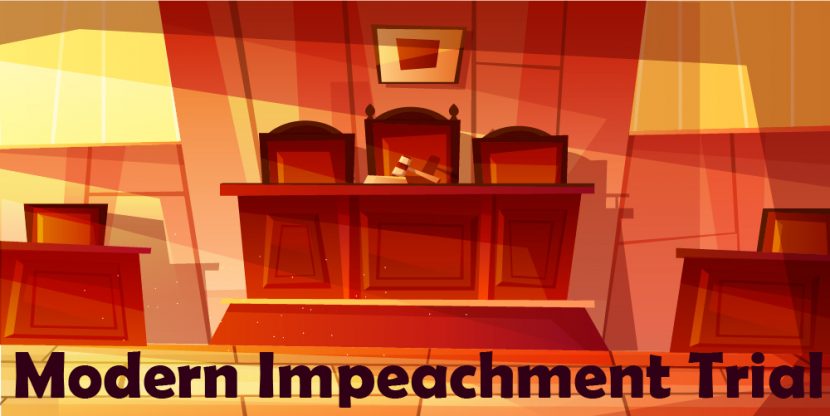 Parody of Due Process in High Court

The sound of the Chairman’s gavel echoes through the court. The trial begins. The defendant smiles and winks at the judge and jury of Senators. The chaplain begins his prayer:

“Oh, great theoretical power, bring us all together as we do thy will. Let there be no deviation from our purpose at hand. Help us to save the country from thine darkened enemies. And bless these proceedings to their preordained conclusion. Amen.”

The Chairman pounds the gavel again. We now call to order the trial of Satan. He has been charged with treason, corruption and violating the laws of our country and basic human decency. We will first hear from the prosecution.

Light shines from above. The prosecuting attorney, Jesus, descends from above, to voices of celestial choir. When he lands, he begins his opening statement.

“The overwhelming evidence of facts and witnesses will show that the defendant, the Prince of the Air, has committed gross abuse of power, blatant corruption, and treason against all of humanity, and should be removed from power.”

The Senators respond with catcalls and boos. The Chairman bangs his gavel, and says, “Enough of these radical, left-wing, deep state, lies told by evil people. This trial will not be rigged. It will be a fair impeachment trial. Then we shall acquit. Now we will hear the real post-facts from the counsel for the defense.”

Satan’s lawyer steps to podium. “My client has done nothing wrong. He is perfect in all his ways. He is the Chosen One. He alone has made the world the greatest it’s ever been. Giving rich people money has eliminated all poverty, disease, and indigestion. All his enemies are evil. Lock them up!!!”

The Senate, like zombies, chant: “Lock them up! Lock them up!!! The Chairman pounds the gavel for order.

"Now the prosecution may present his bogus case. Senators you may now insert fingers into your ears.”

Jesus: “I call as my first witness…”

Chairman: “Witnesses are out of order due to new rule 666. They would unfairly prejudice the acquittal. They are all liars, political operatives, radical socialist, Mexican Drug Dealing Immigrant Muslim Terrorists! Especially those appointed by the defendant. It is impossible to have a fair impeachment trial with witnesses. We will have an untainted exoneration of all wrongdoing. And if wrong was done, well, um, he’s learned his lesson.”

Jesus: “Well…I at least will enter into evidence…” 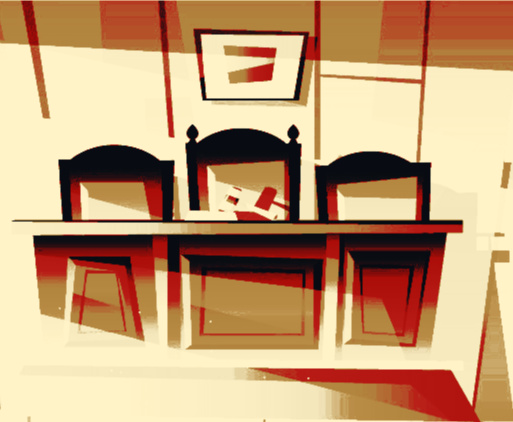 Chairman, exasperated, pounds the gavel. “This is a trial!!! A perfect, well scripted trial!!! You can’t have evidence at a trial! Especially when the defendant has done nothing wrong. And is perfect. He is so perfect that his crimes are innocent. Even for ones he committed he is not guilty.

Plus, his crimes are fun ones. We like them. We have to like them or he’ll call us names. He is too perfect to be guilty of anything he does. So, no witnesses, no evidence, no crime. No see, no hear, no problem. He is so innocent, why would we need evidence. If the trial is fixed, you must acquit!”

Jesus: “How can I present…”

Chairman: “It is clear you haven’t proven your case. You’re not a very good lawyer. In fact, you are the one who is guilty! You sir are evil! You are an enemy of the people!

Points to Senators, who on queue shout: “Lock him up! Lock him up!” It is clear, due to lack of any credible evidence or witnesses, we can take our vote for acquittal.

Queues Senators to take fingers out of ears.  Jesus, angry, says to Senate,

“I’m out of here. You can all go to...stay right where you are until the people want something better.”

The light comes from above, the celestial voices sing, and Jesus ascends. Chairman: Now we will have our vote…

If you enjoyed this poetic commentary, you'll enjoy "Are You Ready to Rumble."

The Irony of Gil Scott Heron

Nation Falls Under Own Weight